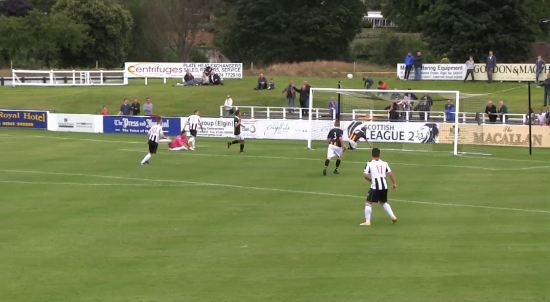 Craig Gunn looks on as his chip heads for the net.

For Marvin Andrews the city of Elgin was probably just another dot on the map - until a former team-mate called him up and asked for some help.

Doubtless players and officials at East Fife will this morning think themselves the unfortunate victims of that telephone call.

The former Rangers central defender may now be 38 years old and carrying even more bulk in his giant frame that brought fear to opponents and confidence to team mates in his younger days, but they say class will out - and that was the difference between Elgin and East Fife.

Andrews stood strong at the heart of the Elgin defence, prompting and cajoling a back line that grew in confidence as a result. East Fife pressed as you would have expected from a side that had suffered relegation just a few months earlier, but rarely did they breach the Andrews-inspired wall in front of them.

Even when they did they found another former Premiership player proving himself up to the task, Michael Fraser pulling off stunning saves either side of half time to ensure the home side had a platform on which to build.

After seeing off the visitors’ early attempts at breaching their back line it was City who forced the first save of the game, a Craig Gunn free kick parried away by goalkeeper Fleming.

Daniel Moore, making his league return to Borough Briggs after an ill-advised spell in the Highland League, was given the freedom to operate on the left or right flanks. It was on his more traditional left beat that he drifted into the box to accept a Nicolson pass, firing over an effort that evaded all when a tap would’ve opened the scoring.

The visitors reacted with a cross from Mullen cleared by the irrepressible Andrews before a quickly taken corner almost caught the home side napping, Nicolson recovering to clear the danger.

Beaton fired in a superb free kick for East Fife from 25 yards and must have thought he had scored - but Fraser flew to his right to turn the ball around the post.

Elgin came out from a half-time break having clearly been told that they were solid enough at the back to show a bit more adventure going forward. That almost produced the opening goal when a superb move led to Beveridge clipping a delightful ball in to Sutherland.

The striker had all the time in the world to turn and shoot unmarked as he was just eight yards out, but could only find the side netting.

At the other end East Fife came as close as they had all afternoon when Cook clipped a ball in from the left flank that drew Fraser from his goal - but he had misjudged and allowed Austin to get a header in that just scraped past the post.

Soon after Elgin scored the goal that won the points - and who else to provide the defence-splitting pass but Marvin Andrews. Picking the ball up on the left flank just inside the East Fife half, Andrews looked up before pinging a ball forward that located Craig Gunn at the edge of the six-yard box.

The striker controlled the ball superbly, forcing goalkeeper Fleming to rush out for a challenge - only for Gunn to clip the ball over his head and into the net.

Try as they did the best East Fife could come up with in response was an effort from McShane that was brilliantly touched over the bar by Fraser.

For the hero of the day there was a bloodied end, Andrews wounding the bridge of his nose in a clash of heads - he did not let that stop him finishing the game however, and quite rightly acknowledging the plaudits that came his way on the final whistle.