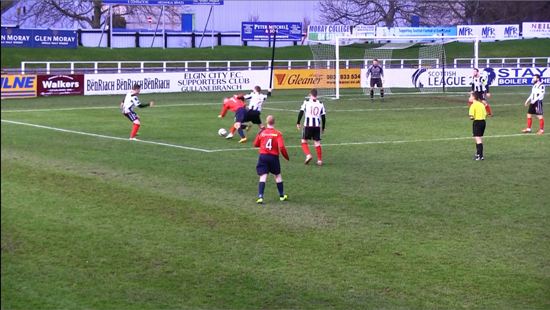 Barry Wilson’s first match as manager of Elgin City will not be memorable for the quality of football as neither side managed to raise the barometer above average at Borough Briggs.

Any latecomers to the game would have had to enter the ground over 30 minutes after kick off to have missed anything of real significance, play having been restricted to a few stabs in the direction of the City goal but to little or no effect.

Ironically it was at the other end that the first real opportunity arrived, Craig Gunn leaping on a defensive error to dart into the area only for his resulting shot to land safely in the hands of goalkeeper Neil Parry.

Gary Phillips typified Albion’s efforts when left with a free header six yards out - but he as with all before him he could not threaten Ray Jellema in any way.  City might have gone ahead when a cross found Dennis Wyness at the near post but a last-ditch tackle put paid to the first half action.

The visitors came out for the second half with a clear determination to upset their hosts - it took them just 30 seconds to threaten, a poor header allowing McGuigan to dart down the right flank only for his cut-back to be well blocked by Crighton.

Crighton again blocked an effort from Cusack seconds later, and from the resulting corner McGuigan really should have done better when he was left entirely along to head down from inside the six-yard box with Duff having to hook the ball from under his own bar.

The early Albion pressure finally paid off when Crawford cut inside, he appeared to stumble just inside the area but as he regained his balance Beveridge put in a rash challenge that left the referee with little option but to point to the penalty spot - leaving Chaplain to despatch the ball to his left as Jellema headed in the other direction.

City almost hit back immediately, Gunn flicking the ball into the path of Sutherland who was denied by the quick reaction of Parry in getting down to block at the striker’s feet.  City had finally discovered the art of urgency and the same pairing had Albion in a panic soon after, this time Gunn having the ball blocked at his feet by the alert Albion goalkeeper.

Parry was, however, very much caught off balance when Elgin did equalise.  A free kick into the area found Jamie Duff with his back to goal - as he turned and flicked the ball over the head of his marker it completely fooled the goalkeeper, who was left stranded as the ball spun over his head before dropping just under the bar and into the net.

Elgin produced the better opportunities in the closing stages, notably a shot from Masson that evaded a ruck of defenders but was blocked by Parry.

In the final minute Paul McMullan went to ground deep in his own penalty area with no other player involved, his injury resulting in his having to be carried off the park.